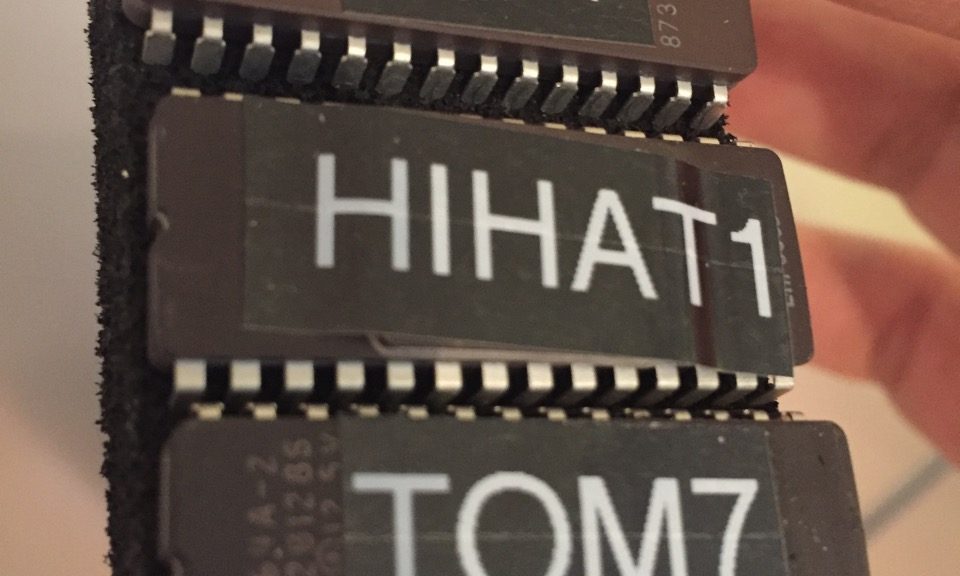 To finance the LinnDrum I had to sell one of my babies, the Drumtraks. It has acted as a Linn stand-in, but now I have the real thing so the Drumtraks had to go. Very nice drum machine though. The happy new owner is Val Solo from S.P.O.C.K. 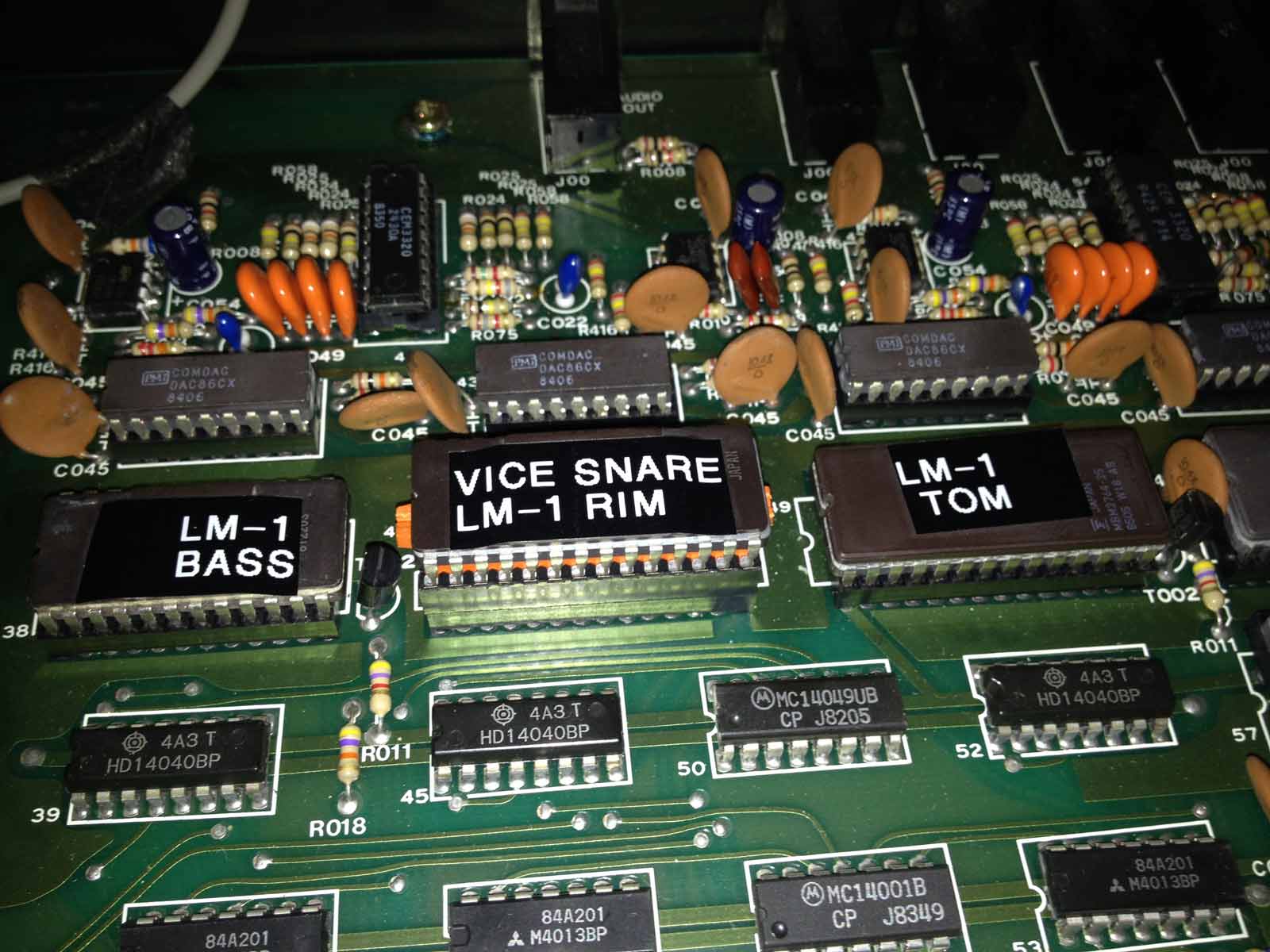 I just wanted to share how the SCI Drumtraks creates the closed hihat (ch) sound from the sample that is actually an open hihat (oh).

The hihat chip in the Drumtraks is a single 2764 containing a whopping 8 kb of samples.  Remember that electronics where much more expensive back then, and costs must be cut. One method was to use the same sample for the oh and cc. This was the case on the Linn LM-1, Oberheim DMX / DX,  Drumtraks and probably a lot of other digital drum machines from this era.

The trick is to use the last part of the oh sample and add some envelopes to it. Below is the Drumtraks hihat chip loaded in Adobe Audition.

The red marker marks sample number 4096, which is exactly half of the total 8192 samples. It’s approximately here the ch starts. But, when recording the ch, it doesn’t look exactly like that. Take a look at the recorded audio below:

To make the ch fade out quickly, an envelope is added by the Drumtraks.  If you don’t believe me, compare this image to the first one, the peaks are easy to identify.

What about the oh, does it only play until sample 4096? The answer is no, the oh plays the whole 8192 bytes. Take a look at the screenshot below:

Notice how different it sounds when processed by the Drumtraks, and that’s the reason for having a Drumtraks. 🙂

On the forum “99musik” where all the Swedish synth nerds hang, there was a thread titled “Axel F with different synths”. When I saw that, I recalled that I about half a year ago while drunk did a test recording with the JX-8P and Alesis HR-16. Everything was played from memory so the key is not right, the tempo is quite right.

I opened the Logic-project and realized that the drums sounded like crap. They needed to be replaced. For this I had two choices, the Oberheim DMX or my newly aquired SCI Drumtraks. Since I haven’t installed the midi mod on the DMX yet and the SCI Drumtraks kick and snare are more Linn-like, I chose the Drumtraks. My JX-8P was not connected so I decided to use the old recording and just loop it. Would of course have been more 80’s to play it live! Here’s the result:

Both the brass and bass are stock patches from the JX-8P. All drums are stock Drumtraks. Note how I test the different the different sounds on the percussive channel of the Drumtraks in the end. Claps, tamb, cowbell and cabasa are on the same channel and cannot be played simultaneously. The delay is a classic 80’s trick to get around that limitation.

The thread on 99musik 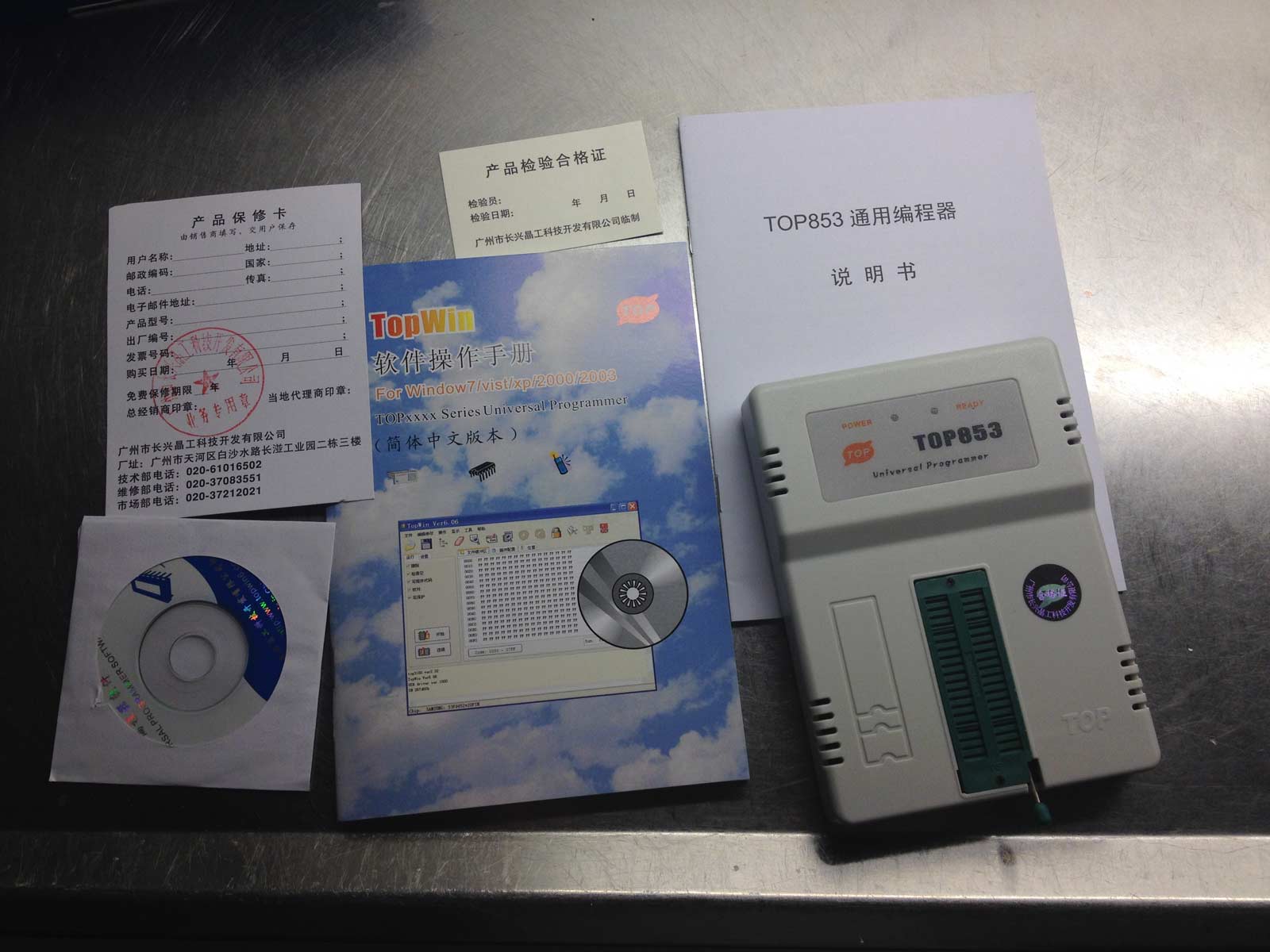 Today my TOP853-programmer arrived from China. It’s a cheap EEPROM-programmer that I intend to use for programming EPROMs for my Drumtraks.  At $40 it’s worth taking a chance, but I’ve heard others that have had great success with them.  I bought it from “BuyInCoins” and the delivery time was less than three weeks to Sweden. The thing to be aware of is that the TOP853 doesn’t work with 64-bit operating systems. That’s actually not a problem since I have a virtual Windows XP-machine that I use for a lot of old skool stuff.

In the slight dented box was the TOP853, a USB cable, a small cd with drivers + software and lot of documentation in Chinese. I ignored the cd and manuals and went directly to the TopWin download page (also in Chinese). The download of a few megabytes took about 10 minutes! I started the installation and chose English (should be Chinglish) and the installation started. After the installation I started the software which couldn’t find the TOP-programmer. I looked in the Device Manager and there was an exclamation mark on it, so I restarted XP. After the reboot the TopWin software found the TOP853 without any hassle. Having never done things like this before, I found the software very easy to understand. You start by selecting the correct chip by manufacturer, and if it’s not there, choose a generic profile with the same properties.

Since I don’t have any empty EPROMs and my UV-eraser-box haven’t arrived yet, I could only test the reading capabilities. My Drumtraks was supplied with some extra chips with unknown origin. After tweaking the reading settings (since the particular chips weren’t in the manifacturer list) I managed to read all chips. The Drumtraks use 2764 EPROMS for all voices except the kick which is a 2732. I compared the contents with the all the EPROMs available on Electrongate, they will probably be added here. Paul who own Electrongate is  a very nice guy by the way!

Next step is to burn some Linn LM-1 EPROMs for the Drumtraks!

Today my SCI Drumtraks 400 arrived! Unfortunately I’m so fed up with work so I haven’t had much time to play with it yet, just a few minutes. But my conclusion so far – it sounds fantastic! The kick is so deep compared to the DMX!

A fun little trivia: I’m the third owner. The first owner was the german italo/techno/electronic/new beat producer Andre Fischer. He bought in back in 1984 together with an SCI Six Track. Two months ago it was shipped from Berlin and sold the second owner who used it on a few recordings and then sold it to me. I was actually offered to buy it a month ago but it had problems with the kick channel which was later fixed. Here are a few songs that this particular Drumtraks was used on:

Expect a few demonstration videos in the near future!