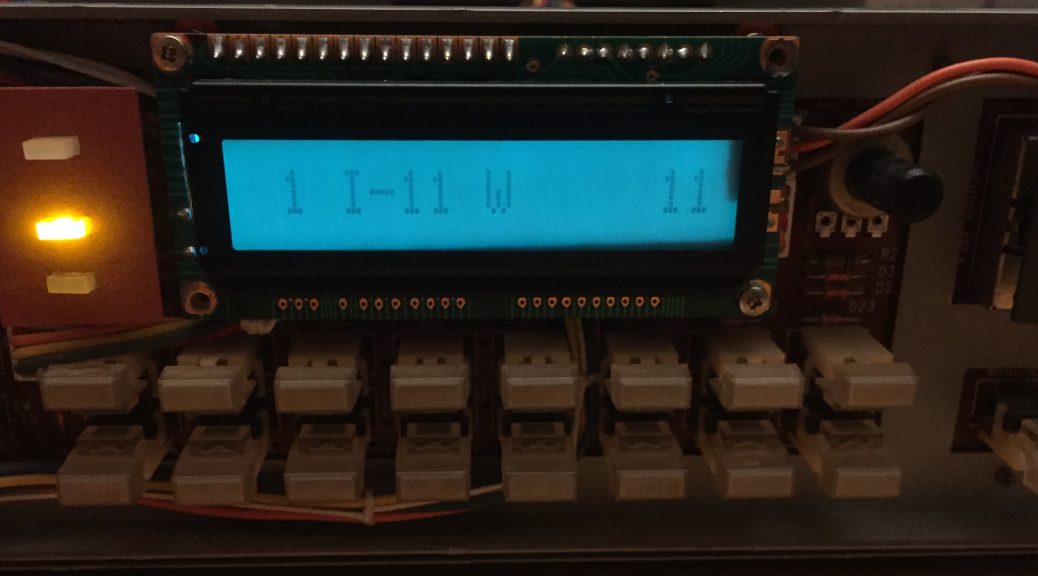 Today I changed the backlight on a Roland MKS-80 rev 5. If the backlight is very weak, the electro-luminescent foil it’s probably worn out. They simply have a limited lifetime. When this happens you have three choices;

I think the missing backlight is really annoying and makes the synth harder to use, so not doing anything was not an option.

Replacing the LCD would probably not be too hard, it has standard dimensions of 80×36 mm and are cheap. If you’re lucky a new LCD would just work, but in the worst case there could be compatibility problems. I’m not saying there will be problems since I haven’t tried it, but there’s an obvious risk. For example, changing the LCD on an EII to modern LCD also required changing a chip, otherwise the LCD just displayed strange characters.

I went for the third option, namely just replacing the foil. There are some companies providing replacement foils cut to the right size in various colors. However, I thought I’d give Roland a try since they seem to have a lot of old stuff left in stock. So I emailed Roland Scandinavia asking for a foil for a Roland MKS-80 rev 5. Since they didn’t know exactly what part was, they emailed me the service manual for me to look up the part number.

After browsing the manual I finally found what I suspected was the correct part, namely “15029181 EL-101 (electro luminescence)”. Roland said it’d be around €20 and recommended me to visit my local Roland retailer to order it, so I did…

Replacing the foil is quite straight ahead. Most of the work is getting to the LCD. To do this you of course have to remove the lid, and then the front panel. Then you have to undo three screws and three standoffs so you can fold the two voice boards upwards to finally reach the CPU-board at the bottom which the LCD is connected to in three places. Two of the connectors are snapped in place, so use a small, flat screwdriver to fold the latches away. Then you finally remove the four screws holding the LCD in place, remove the LCD and heat up your soldering iron.

I used desoldering wick to remove the old solder. Then it’s just a matter of sliding the old foil out of the LCD. The “new” one I got from Roland is probably NOS, because it looked exactly the same as the original one. I slid it into the LCD and soldered it’s two legs to the circuit board. I actually cut away about two mm of each leg since they were a bit too long. I powered the MKS-80 up, and the backlight was really bright – success! However, it seems that I should have placed it a little more to the right.

Then it was just a matter of reassembling the MKS-80. However, this was not as easy as disassembling it. The tricky part is the front panel that has three rectangular holes for the OMNI, POLY, MONO leds. The leds have to go straight in their holes, otherwise the front panel won’t sit where it should. There’s also a similar led for MIDI MESSAGE to the right which makes it even more trickier… Do not try to force the front panel, just take it easy and align the leds, and do try not to get too annoyed.

I put the MKS-80 back in the rack and fired up my DAW to realise that the MKS-80 sounds great and the backlight is strong – but – the MIDI MESSAGE led doesn’t work… I will replace it some other time.