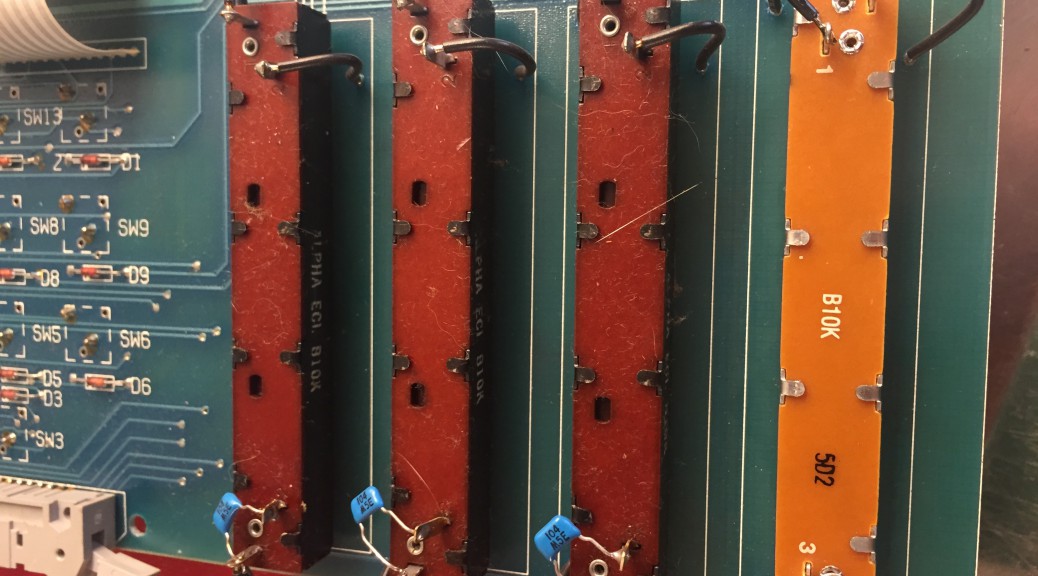 Sooner or later one of the slider pots will fail on the Emulator. This has happened to the ‘A’ slider on my copy. The fault was that it simply didn’t work, no values were changed when sliding it. When I bought the EII, this slider was also missing a cap, so it wouldn’t surprise me if someone had done something to it before.

Replacement sliders can be bought on eBay for $15 + shipping or much cheaper somewhere else. I bought the exact same slider pot and capacitor at my local store, Electrokit, and it set me back $4 in total.

These are the parts that I got:

A few months ago I also bought a new slider cap on eBay for $5 + $2 shipping, it could probably be found somewhere else much cheaper.

It’s important to make sure that the slider has the correct form factor, in this case the “arm” that the knob will sit at was 5mm too short. On the other hand, the original sliders are mounted with 5mm nylon washers between the board and the slider. By skipping the washers, the new slider arm got the exact same height as the original ones. I stupidly forgot to photograph it…

Worth mentioning is that the four pins on the slider were positioned differently than on the original. They did have similar markings though: 1, 2, 2, 3.

The replacement process itself is very straight forward. Start by opening the EII and find the upper left board. Disconnect all cables that goes to it, and on the front remove the four slider caps and the volume knob. Finally unscrew six Philips screws and the board is loose.

The slider is then screwed to the board with two smaller Philips screws. I started by desoldering the wires though, before unscrewing the slider. I opened the old slider and it was obviously physically damaged, no wonder it didn’t work.

Then I screwed the new slider to the board without the vinyl washers in between, and soldered the wires and capacitor to the corresponding pin numbers. Luckily the wires were long enough to reach the pins even though the pins were physically in different positions.

I’d say the operation is very easy to do and that the A slider really is something you can’t live without unless you can settle for presets. The A slider is used for fun stuff like cutoff, start- and loop points etc.