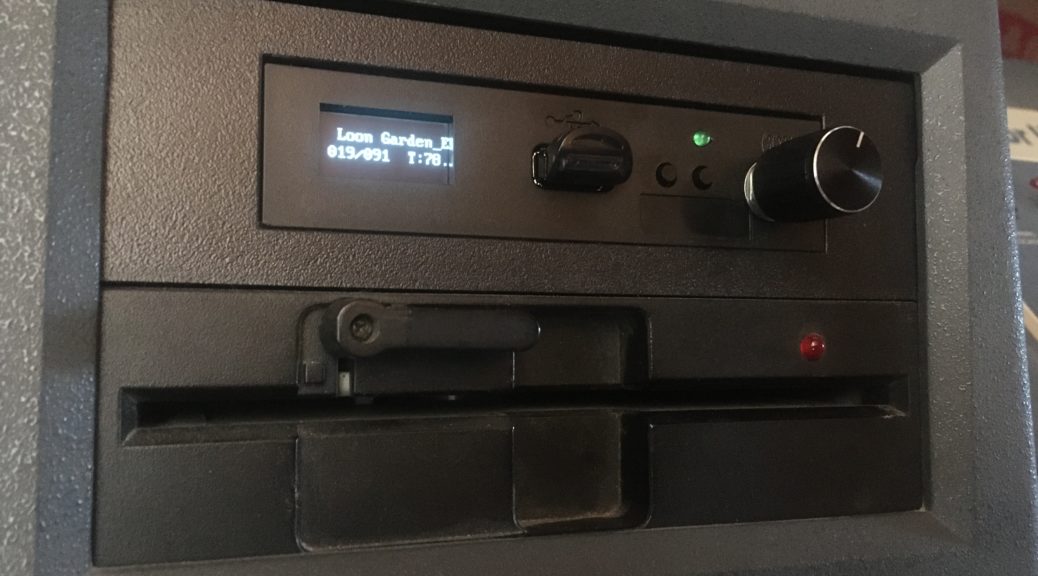 I have decided to replace the HxC I installed five years ago with a Gotek.

If you want to install a Gotek in your EII, go to this post and see how I did all the cabling and mounted a 5.25” adapter. Pretend that the HxC is a Gotek, then use the installation instructions and configuration from this post!

I decided to replace the HxC Floppy Emulator with a Gotek Floppy Emulator running FlashFloppy! The primary reason was that I needed the HxC’s more advanced jumper settings in another project. After the swap was done, I realized the Gotek was a great replacement and actually suited me and the EII better. More on that later…

A stock Gotek only emulates a PC floppy. By flashing it with a custom firmware like FlashFloppy or HxC, it can support other formats. The Gotek is also easy to mod with an OLED display and potentiometer! It’s available on eBay or in stores that sell stuff for vintage computers.

Yes, the HxC was originally just a hardware floppy emulator running the HxC firmware (doh). That firmware has been ported to work on Gotek, that’s why a Gotek can run HxC.  So the HxC software nowadays works on non HxC hardware as well.

I bought mine from Amiga Kit in the UK, but there are other vendors. I added the optional OLED display and potentiometer options. Those two mods are a must! There’s also a speaker mod available, but I skipped that – when it comes to sound – only the real deal is good enough!

It came pre-flashed with FlashFloppy 2.13. I recommend buying a pre-flashed Gotek unless you really want to flash it via serial yourself. As soon as the Gotek has the FlashFloppy firmware, it can be updated with USB.

It’s as simple as installing an HxC. A tip for opening up the EII, is to place it on two boxes like I did. This gives access to the screws on the bottom.

The Gotek fits perfectly in the adapter (no new holes had to be drilled, like I had to on the HxC).

The jumper was set to S0 equivalent to the HxC’s ID0A.

When I researched EII + Gotek + FlashFloppy, I was worried that it wouldn’t work when I found this issue. It seemed like the issues has been resolved though. I got the config from the same thread, FF.CFG.zip

Below is a condensed version to show the settings that I use:

I haven’t checked if the secondary 5.25” drive still works, but I can’t see why it wouldn’t. To be honest, I don’t remember if I checked if it worked with the HxC.

During the installation/testing I used a semi-old SanDisk Cruzer 8GB USB 2 stick. It did however stick out a bit too much, so I got a SanDisk Ultra Fit 16GB USB 3.1 instead, that is way more compact. Unfortunately the Gotek didn’t seem to discover the Ultra Fit stick.

A quick browse of the FlashFloppy changelog revealed that problems with Ultra Fit sticks were fixed in 2.14, so I took good old Cruzer stick and updated the Gotek from 2.13 to 2.14. After the quick update, the Ultra Fit was recognized.

To me, we have a clear winner, and that’s the Gotek. The Gotek has none of the annoyances I had with HxC – the bad screen, the awkward navigation and the 90’s style Java configuration software.

The OLED screen is fantastic – clear and redraws quickly! Smaller than the HxC, but that’s not a problem to me. It’s also a lot easier to see what’s a file and what’s a directory. Also, unsupported files and system files, like .DS_Store and Thumbs.db from the computer, are not displayed!

Combining the OLED with the potentiometer makes navigation quick. Another thing that’s quicker, is the fact that it’s a USB pen drive and not SD card – I no more need to find that SD card reader. One could have objections to the fact that the pen drive sticks out a bit, but there are very compact models available, if sticking out is a problem.

The FlashFloppy configuration is file based, just edit the FF.CFG file in your favorite editor (mine is VS Code). HxC’s config file is binary and must be edited with the HxC software.

Another thing – HxC is really mature by now, but it also costs money. FlashFloppy seems to work just as well for the EII, and it’s free!

Here’s a summary of the pros of each floppy emulator.

+ Much clearer (but smaller) screen

+ OS system files are not displayed

+ Config can be done in a text editor