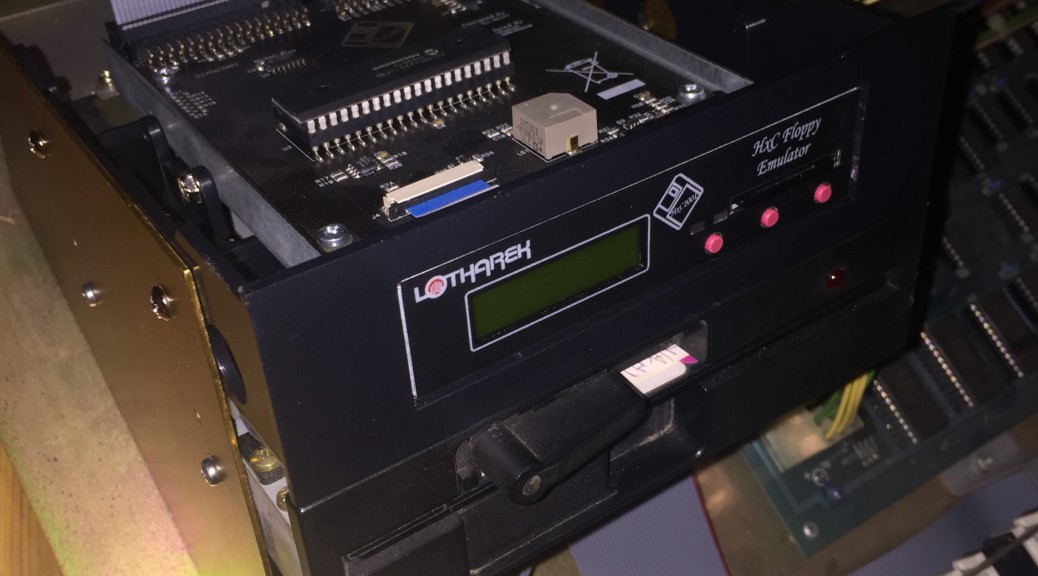 Ever since I got my EII I’ve been planning to add an HxC Floppy Emulator. These are some of the reasons:

As the EII uses 5.25″ floppy drives, the connectors aren’t the same as for 3.5” drives. To solve this you basically have three alternatives:

There’s a comprehensive manual from E M X P describing everything that you need to know about the HxC installation, including diagrams of the cables, whichever one you choose. Since I don’t like messing with the original one I chose to create one from scratch. I skipped the extension/adapter route since it would require a female 5.25″ connector, and I could as well create a whole new cable since I was messing with cables anyway. It’s also worth noticing that the cable is very long, almost a meter, which makes it nearly impossible to find a standard floppy cable and just add an extra 5.25″ male connector. In the picture below, taken from the manual, alternative 1 is the route I took. Alternative 2 shows the extension/adapter cable route.

First thing to do is to up open up the EII, which is a very simple process. Just a couple of standard Philips screws at the back and underneath. Then take the top of. Also locate the 4 screws that attaches the “floppy tower” to the chassis to remove it.

At the middle of the main board, above middle C, a flat cable is folded, then going to the left, under the floppy tower and up to the drives. Remove this cable and use it as a model for the new cable.

Prepare the flat cable by removing 6 of the wires to “convert” it from a 40 pin to a 34 pin flat cable. Then fold it at the exact same places and put the connectors at the same place, with one big difference – where the original cable has a 5.25″ for the upper drive, replace this with a 3.5″ connector. I used a vise to evenly squeeze the connectors to the cable. Make sure you orient the connectors the right way. Look for a little plastic piece between the 2nd and 3rd pins on the 5.25″ connector.

The lower floppy drive didn’t want to load a disk that I know worked in the upper floppy drive.  Therefore I swapped them and carefully set their jumpers right. Now the lower one worked, but not the upper. Perfect, since my intention is to keep a working 5.25 floppy in the lower position and the floppy emulator in the upper position.

The faulty floppy drive with serial no 143922. Maybe it just needed cleaning, I don’t know –  I’ll keep it as a spare or something. It’s amazing the upper one works after 30 years…

I’ve used the HxC in lot’s of different samplers, and it has never properly aligned with the machine I’ve put it in. It always extends a couple of millimeters outside. So I decided to modify the HxC by drilling new holes in its metal chassis. For this I used 2.5 mm cobalt drill and used the adapter as a template. I chose this particular adapter since its pattern on the plastic matched the EII best.

Also set the jumper on the HxC to first position, as in the photos.

For power to the HxC, a Molex to floppy power adapter was needed. Luckily I had a few of these lying around, probably included with some PC power supply, but never used. They can easily be found on eBay for a dollar or two. It’s simply connected to the Molex power connector that was previously connected to the now removed 5.25″ floppy drive.

Simply reassemble the EII the other way around! 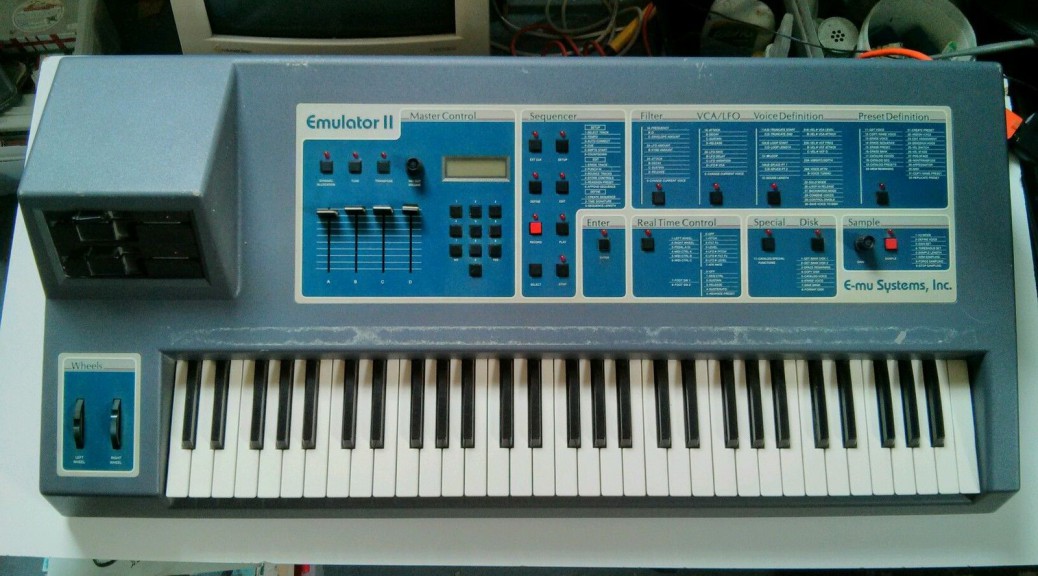 I just did something quite crazy – I bought an EII on eBay. It’s said to be working with the exception of the disk drives.  Those could and should be replaced with an HxC anyway. The big challenge will be shipping it to Sweden. To be continued….

Continued: It will be reshipped in a container since it’s larger than USPS allows. Will probably arrive around Christmas. Worth waiting for…

Bonus: someone has re-created “West End Girls” on an EII.  Fantastic!

I just swapped my Kawai K3 for an Akai S900 and a pile of cash. The K3 was one of those synths that are nice, but of some reason never is used. For that reason I decided to sell it.

I’ve also been working on converting Fairlight I/II/IIx disks to other formats. Akai S900 is one of them. So far I’ve used one of my Oberheim DPX-1s to playback the disks, but a lot of the S900 file formats aren’t fully documented. To be able to reverse engineer those formats I needed a real S900 to be able to set parameters. The DPX-1 is a sample player only, no parameter can be changed.

What’s interesting about the S900 and S950 is the fact that they have variable sample rates just like old drum machines like DX/DMX and Linn. This means that the S900  can play back sounds at any speed between 7.5 kHz to 40 kHz, and it does this by changing the clock. This could be described as manually turning a vinyl disk at different speeds. Most newer samplers uses the “drop sample” method instead. What this actually does is to throw away or duplicate samples. If a sound is to be played back at the double speed using the drop sample method, every second sample is discarded and never played back.

Next thing is to temporarily take the HxC SD Floppy Emulator from the Roland S-330 and put it in the S900 for testing my own generated disk images.

Lately my Roland S-330 sometimes hasn’t started when I’ve pushed the power button on the front. I’ve noticed that if I moved the power cable downwards it powered on, although a bit glitchy if I didn’t pull it hard enough. So when I had the S-330 out of rack I opened it up to see if everything looked alright near the power supply. And everything did, the soldering looked perfect. Moving the power cable made it turn on and off. I reckoned there must be some kind of breakage in the power cable, probably where the cable goes of the case.

As you can see the cable is run through a bit of plastic that is mounted on a separate metal plate. Removing the plastic was a major PITA, the trick is to rotate it a bit and using a pliers and push it from inside out. After the plastic bit is loose, it’s possible to open it with a flat screwdriver. As you can see in the photo below, the plastic piece has deformed the cable so it looks like a U.

I bought a new power cable with a Euro plug, the original cable is an old style ungrounded plug.

To start with, I cut away the bad part from the plastic piece.

The I tried to unsolder the old power cable. That was unsuccessful and the tubing on the brown hot cable was damaged, so I fixed it with some yellow heat shrink tubing. I then cut the old power cable and solder it to the new one. Before I soldered I did remember to run the new power cable through all the bits and pieces that the original cable went through.

I powered it up and it worked perfectly. By the way, putting the plastic piece back was an even harder task than to remove it, but with a lot of patience I succeeded. The S-330 is now back in the rack, but before I reassembled it I took some bonus photos of it’s inside. Notice all the custom Roland chips and the HxC SD Floppy Emulator as well as all the different outputs.