I just got added in the waiting list for the Organix JX-3P MIDI Expansion Kit. The JX-3P already has midi, but the Organix kit adds some features. The one I need the most is the ability to use the PG-200 and midi at the same time (this isn’t possible when standard). Another cool feature is that the PG-200 will send midi CC’s, and the JX-3P will receive midi CC’s. This is extra valuable for those who don’t have a PG-200 and want to use a standard midi controller like a Behringer BCR-2000 or Korg nanoKONTROL. Since the JX-3P is from 1983 it can’t even receive midi sysex! 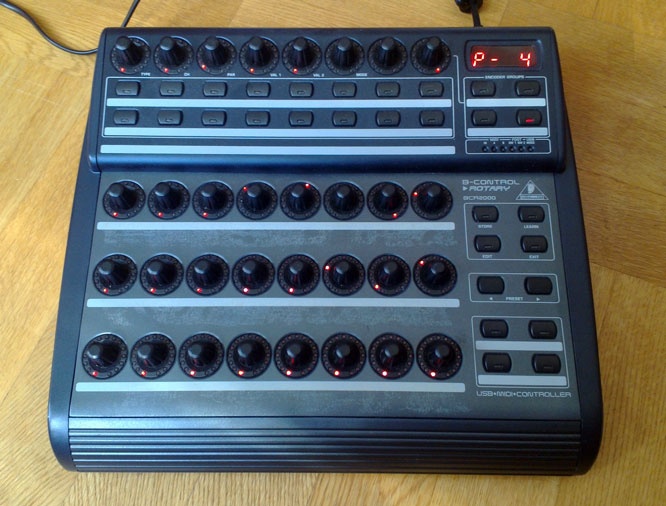 One of the few Behringer products worth getting is the Behringer ADA-8000. The other one is the BCR-2000 which is a midi controller with 32 assignable rotary encoders that even do SysEx. Today I bought a used one with unknown USB functionality for 400 kr ($60). This will be perfect for the Roland JX-synths whose weakness is the lack of encoders. And the Kawai K3 and Waldorf Microwave as well…

Since my M-Audio Axiom Pro 49 just died, and I’m in the middle of an Arduino project, I desperately needed a new midi controller with lot’s of encoders. So i bought a Korg nanoKONTROL 2. Very nice, cheap and usable little thing. One thing that I actually missed to check before buying it was the fact that the “sets” from the nanoKONTROL 1 is gone in the nanoKONTROL 2. The only way to solve this is to use the nano kontrol software and save the settings. That’s very tedious though, and won’t be practical in reality. So my word of advice is to try and get a nanoKONTROL 1 instead.

I’m actually not very interested in virtual analogs. With an all digital audio path you could as well use software instruments. One good feature though is that some of the oscillator waveforms are sampled from real classics. The Venom also has classic drum machine samples from 808, 909 and more. This review is quite nice:

Anyway, a couple of months ago I pickup a (not that) used Venom for about 1000 SEK / $150. My plan was to use it purely as a midi controller since it has four assignable knobs that sends midi CCs, so I thought why not.

After a few hours use, suddenly the A3-key started to squeak every time I pressed and released it. It’s hard to describe how utterly annoying that is, I was near reinstalling my Roland PC MKII that has been turned on and worked flawlessly for 17 years (and still going strong=quality) and sell or trade the Venom for a Behringer BCR-2000. Also, there was something lose in the Venom that rattled everytime I moved it.

With not too much too lose, I decided to try to fix the Venom. The first thing was to open the damn thing. When I looked underneath it, I was chocked to find 42 Philips screws! Insane! Not knowing which ones to unscrew to open the case, I googled for a service manual but couldn’t find one. This had to be done the hard way…

Luckily, it turned out that it wasn’t very complicated, but rather time consuming. What you have to do is simply unscrewing all the of the 32 screws that in “rectangular” holes. The 10 screws in round holes (marked by a red square) are holding the keys to the bottom part of the case. We’ll get to these later.

So I started to unscrew. After that, the top part could be lifted a couple of inches. The only thing left to completely detach the top from the bottom was this lead that connects the keyboard to the motherboard.

As soon as I opened the Venom, this little piece of glue fell out of it. This was also the piece that caused the rattling.

The next thing was to locate what made the key squeak. An interesting and quite confusing thing is that all white keys are marked E1 to E7, plus the C6 key that is marked E8. All black keys are marked C4.

I figured I had to remove the squeaking key and one other key to compare them and see if there was any visible difference. The simplest way to remove a key is to push it towards you, the same direction as the arrow in the photo. It doesn’t take much force. Putting it back isn’t hard either.

Looking at visual differences, there wasn’t any, other than the low quality plastic stuff on the edges left there from manifacturing. You never see stuff like this in an old vintage Roland synth…

Next thing to try was to swap the squeaking key with another non-squeaking one. The bad boy was the A3, so I decided to swap it with the A5 key. To my surprise, the A3 stopped squeaking and so did the A5. Don’t ask me how, but this was the solution! I put the Venom back together, only using a third of the screws just to make sure that it still worked. Which it did! Case closed!

During my investigation I also removed the key circuit boards to see if the error was there. Looking back, this was totally unnecessary. I took some photos, so I thought I might as well post them here.  Have a look at the gallery below.