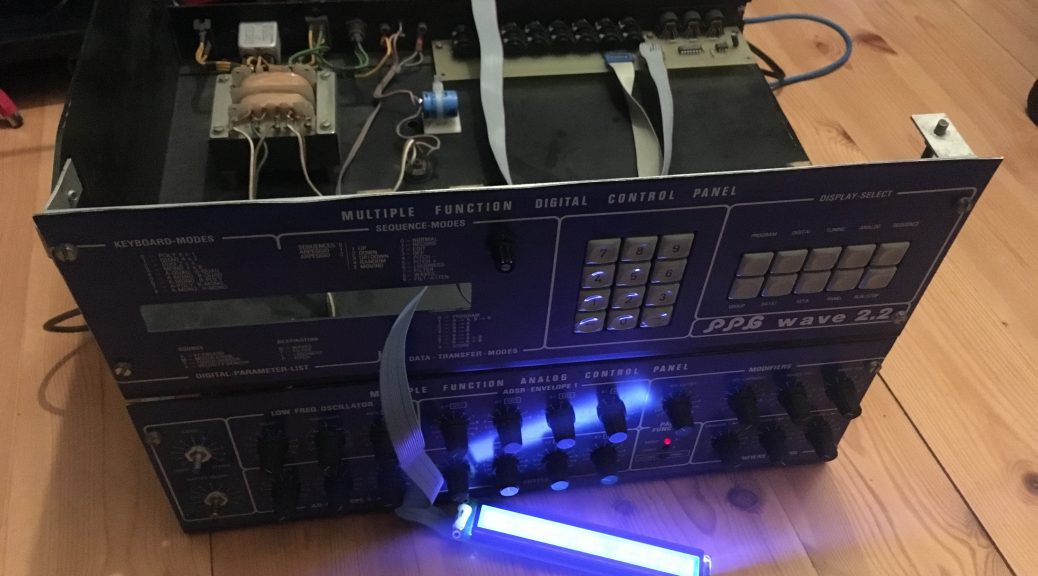 Time flies, it’s been one and a half year since I started this project and progress is slow. Though there is progress!

In March I discovered a battery leak in the PPG Wave 2 and decided to send that board to Virtual Music for repair. I also did the same with corresponding 2.2 board. Since the V8.3 firmware upgrade goes on the same board I sent the chips as well. Besides the battery change, the 2.2 also got a little service.

Today, nine months later, I decided to put the card back in the 2.2 and it started right up! Great success on that and I feel that the hardware is now serviced. Focus will now be on the racking process.

I’ve also done a lot of measurements of the PPG and rack, and right now I’m feeling very hopeful. There were two main obstacles, both having to do with the width.

The first one was the fact that the original LCD and the “button board” simply wouldn’t fit. With the newer LCD, that will not be a problem. The board is around 240 mm and the lcd is 182 mm. That means more than 10 mm margin.

The second one, and this still needs to be solved, is the 2.2 motherboard. The width is 435 mm which is 1 mm wider than the inner width. I see two ways of solving this:

No matter what route I take, there’s one thing that also has to be modified. On the motherboard’s other edge, there are two pin headers that have a 90 degree angle. They need to be desoldered and straightened up, otherwise the connectors will hit the side panel. They can’t be bent when soldered to the board since they’re very thick.

I think the best thing to do next is to simply test fit the board in the case and actually see how many mm that are missing!

I recently got this “racked” PPG Wave 2.2. The history of it is quite unknown, but this brutal treatment was done in Germany by someone else than me. I’m innocent!

Someone has cut this Wave in half, removed the keyboard and put the right side  on top of the left side using standard screws and standoffs from a hardware store. It’s a shame since it looks as though the panel was in great condition – most Waves suffer from the graphics peeling of, especially in the area near the logo close to the push buttons.

Unfortunately, the serial is unknown as on most PPG Waves. It was hand written on a label on the back with a permanent pen that wasn’t as permanent as it was supposed to. It is probably an early/mid PPG Wave 2.2 as it has the same display as the Wave 2 but is equipped with factory midi.

I asked myself – what have I done – buying an expensive piece of junk like this that could electrocute me. And the racking procedure won’t be cheap and will take a lot of man hours. However, I’m running out of space in the studio and PPG Wave 2.2s don’t grow on trees, especially if they’re not upgraded with 2.3 voice cards. So I decided to take on this challenge and make myself a one of a kind rare PPG Wave 2.2 rack. I guess my metal skills from working with cars will be needed…

The mainboard with all voice cards that is on the lower section is luckily enough around 430 mm. There’s also possibility to shave off a couple of mms at the far ends. The pots are placed on a board that is around 400 mm. The “Basis” and “Master Volume” pots to the far left are not on the board and can be placed anywhere.

The upper section has the power supply and MIDI and audio outputs at the back. They can easily fit within in the width. The biggest problem is the so called digital board that has the keypads and the LCD display. Together they have a total width of 460 mm so they can impossibly fit. One solution is to cut boards so one end is in a 90 degree angle (like this racked 2.3). I have  chosen a different path – changing the display to a more modern and narrower one that also has backlight.

The original display must have cost a fortune back then, and it’s not directly compatible with modern displays. Therefore the digital board and display will be sent to Virtual Music in Austria to be modified.

I won’t reuse the original panel metal since a few things will have to be modified and moved around. Instead I will create new original looking graphics for the faceplate so it looks factory.